Cash Awards
We know it's not much, but the slowest runner walks away with $8,000 each year.

We presume money will look slightly different in the future. Obviously, some of it will have Mr. T's face on it, as he became one of the most popular American Presidents of the 21 Century after defeating President Trump in the 2020 election. 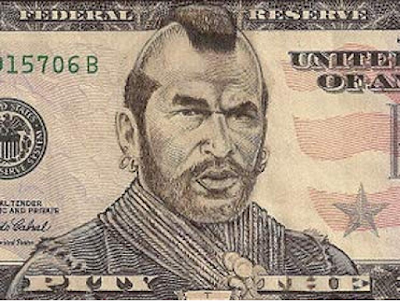 Medals
We think the current trend of race medals being large, ornate, and just generally excessive will reverse. In 2134, we're anticipating that the trend will be for races to hand out junky medals barely worth keeping, and that runners will simply cherish the experience of the race. To continue with the Mars theme, we'll be handing out rusty medals. Those medals will be purchased soon and then placed in flower pots in my back yard. Should be rusty enough by 2134.

Return to Main Page
Posted by Wry Prolix at 1:23 AM